Ninigret Quilters is an organization for quilters of all abilities in the Rhode Island and southeastern Connecticut area. We meet on the second Tuesday of every month at 7pm at the Westerly Senior Center, 39 State Street, Westerly, Rhode Island (Google Maps) to share our common passion of quilting. Guests and new members are always welcome! 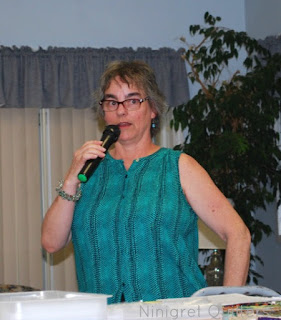 Terri Sontra of Purple Moose Designs presented
The History of the Sewing Machine: A Tale of Intrigue and Espionage. 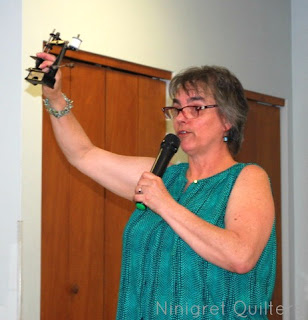 Terri led us through the multiple patent filings beginning in 1755 that led to the current sewing machine. Early patent filings were lost in various patent offices but covered pieces of what became our modern machine. Elias Howe was the first to file a clear patent on a machine that unfortunately did not work, but contained several ideas that were brought to fruition by later machinists.  Mr Howe's patent held up in court and led to a lifetime of licensing fees for Mr Howe. In 1856 Howe, Singer and Potter pooled their patents and formed the Sewing Machine Combination which collected licensing fees until the patents expired in 1877. 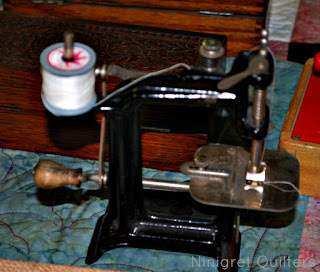 Terri brought along some of her favorite antique sewing machines,
including this portable machine for use while traveling.
It is lso shown above in Terri's hand. 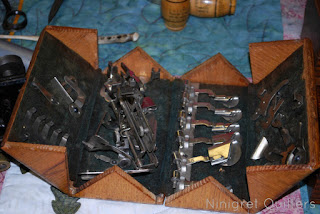 This attachment kit was included with some of the early Singer machines.
The box folds together to form a compact carry case. Singer also introduced several
sales techniques that are still common today including the 1. gradual payment plan,
2) in home trials, 3.) first skyscraper, 4) trade-ins (they would take any machine in trade,
but then they would destroy the competitors machine, 5) first multi national corporation,
6) first to spend 1 million dollars in one year of advertising. 7) first to utilize mass
production. The Singer name was more well known than any other in its time.
And lastly, Singer's wife modeled for the Statue of Liberty.
Thanks for the fun Terri! 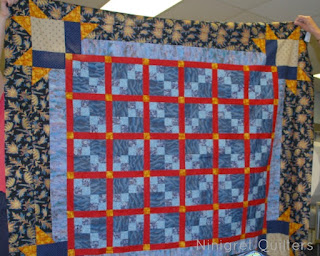 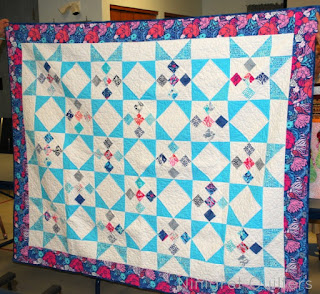 Tina C. made this for her son's girlfriend's graduation from college. 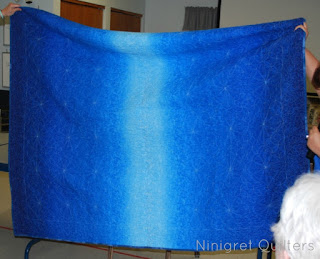 She used this lovely ombre for the backing. 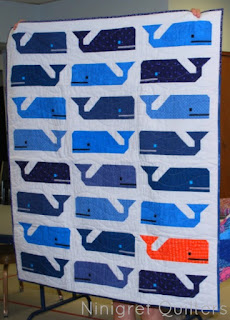 Tina made this baby quilt for her niece in California's first baby.
He is due soon and her niece requested whales. 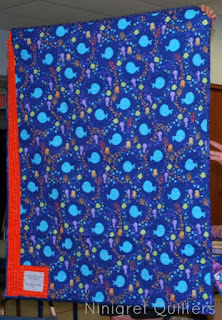 The whale theme continued on the backing. 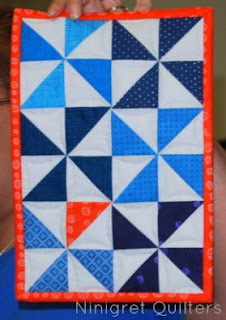 Tina can't stand to waste scraps so she made a mug mat. 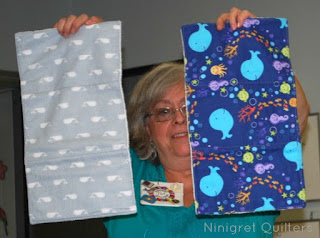 And some burp cloths. 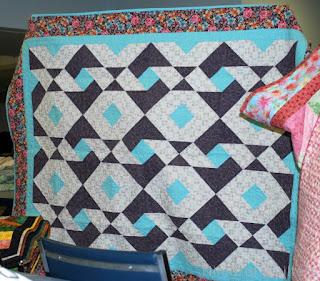 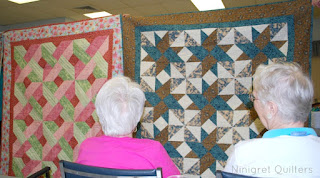 The second (pink) used 5 fabrics and
the third (blue and brown) used 4 fabrics. 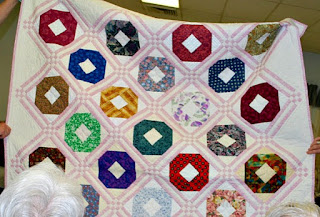 Betsey W did a fun setting of the exchange block from last year
and then hand quilted the result. Lovely! 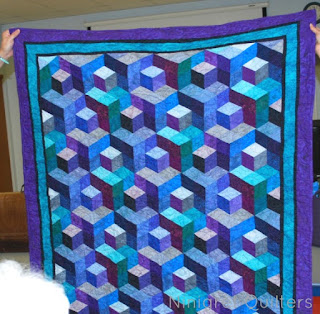 Carol B made a Jenny Beyer Crayon box quilt kit. 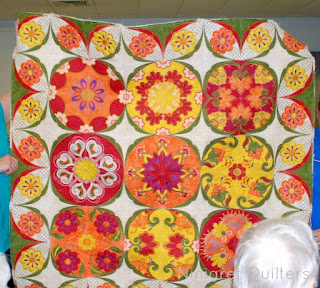 Grazina K displayed her hoopsisters embroidery quilt.
There are 8 layers of materials in some of those blocks!
Gorgeous! 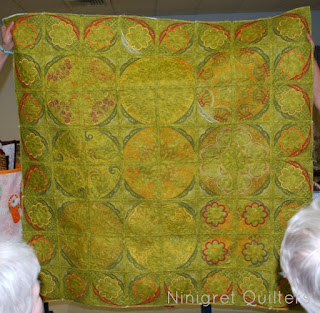 Here is the back of Grazina's quilt. 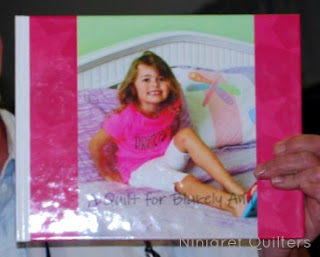 Catherine D displayed one of the books she creates while making a quilt for her
grandchildren. This book chronicles the creation of the quilt from choosing the
fabric to final placement on the bed. Neat idea! 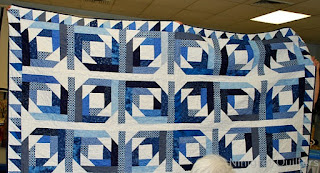 Margaret S made this Bonnie Hunter
Pineapple Blossom quilt for a High School
graduation gift. It comes with a matching pillowcase. 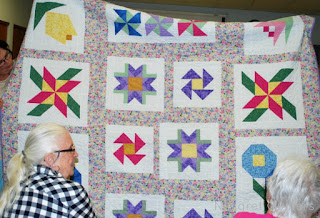 Pat G completed a Joann's Fabric's Block of the Month from 10 years ago. 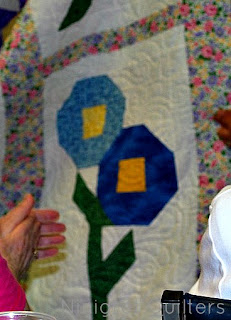 Pat included a few of our challenge blocks from last year. 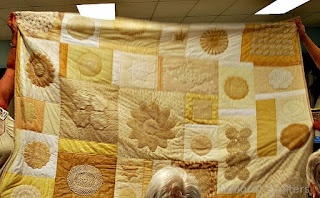 Pat G also displayed her 'doily quilt'. This work of love has been assembled from
favorite doilies from family and friends and was hand quilted by Pat. 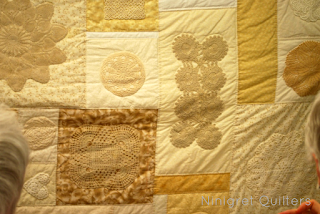 Here is some detail of Pat's doily quilt. 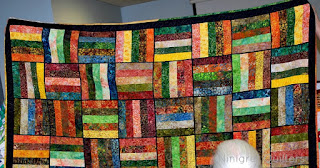 Cindy V made this batik beauty for her brother's birthday.
She added sashing to the pattern and used the one/two
binding trick taught at last months member demos.

Posted by Ninigret Quilters at 4:45 PM No comments:

Since 1981, Ninigret Quilters have promoted the art of quiltmaking in Rhode Island and Southeastern Connecticut.
Ninigret Quilters provide an immersion in a quilting experience of learning, sharing, sewing and reaching out to the community and to other quilters.
Contact us:
P.O. Box 475, Westerly, RI 02891
ninigretquilters@gmail.com